JPAS classes and workshops are going to be amazing. Children will learn from and work with some of the finest industry professionals. Kids and teens, get ready to be in touch with your inner artist, build your confidence, learn skills, and have fun along the way. We have classes, musical revues, and master workshops for you to choose from. In addition to the classes below, be sure to consider our master workshops and musical revue options.

If you have questions please contact J Performing Arts Space Director, Alise Robinson, at arobinson@jccdallas.org or 214-239-7140.

Please scroll down to view all classes!

If your dancer is into musicals, performances, or just wants to get up and move this class is for them! Join us as we get our bodies moving and learn choreography, some basic techniques and play games to our favorite Broadway tunes in a fun and supportive environment.

Lights, camera, action! If you’ve dreamed of being on a TV show, commercial or in a film, we can help! Actors will use monologues, scenes and improv to develop on-camera acting techniques so our actors are prepared for any audition. It will culminate with an agent showcase for parents to attend as well.

In this dynamic fun class, students will learn songs from their favorite Broadway shows. Learn to riff, how to harmonize along with proper vocal techniques! Interpreting musical theater through song is an art and we do it all in this class, in a group environment that is supportive and inspiring.

We offer a variety of virtual private lessons ranging from dance to singing to many different instruments. Lessons available in packs of four, in either 30-minute or 1-hour sessions. All four lessons must be used within three months of purchase.

How to Create Your Own TV Show & Web Series!

In this exciting three-week online workshop, students will learn how to create their own television show and web series from brainstorming an idea through writing a script through filming and post-production.

Students will not only create the content as a team, they will be given exciting tasks and writing prompts to keep them engaged throughout the week. Students will also get to know exciting things about production and the secrets & lingo that goes with “being on set”.

During this hands-on six week class, students will learn on-camera techniques and how to tell your story in front of the camera. Practice using monologues and commercials to create your very own videos for professional critique and discussions. Open to all skill levels.

Create your own play in this fun and engaging class! Through creative exercises, brainstorming sessions, improvisation, character work, workshopping, and more, students write a play together as a group. Students learn all about the different elements which are required to write a play, and find their own creative voices and visions.

Write your own play and learn the fundamentals of playwriting! In this class, you will learn how writers play with elements of character, dialogue, plot, conflict, and more. Through in-class writing and weekly assignments (which are fun and engaging), students will find their own creative voices and visions. 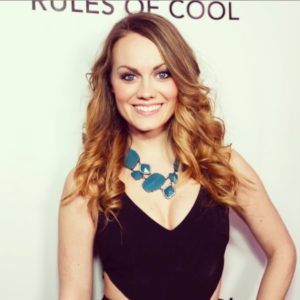 Ashley Kate Adams (AKA Studio Productions): is an award-winning Actress & Producer who made her Broadway Debut at the age of 23 in Tony Award Winning Revival of LA CAGE AUX FOLLES. She has appeared on television in UNBREAKABLE KIMMY SCHMIDT (NETFLIX), ROYAL PAINS (USA), RULES OF COOL (FULLSCREEN), can be heard in TRUE DETECTIVE (HBO), THE RIGHTEOUS GEMSTONES (HBO)  in LOGAN LUCKY, GEMINI MAN & seen in films such as PITCHING TENTS (Hulu), 1 Message (Dish Network) & stars in the upcoming short film LOVE. She recently won the Best Actress Award at the 2018 New York Theatre Festival for the play LOVE and originated the role of Carole in “A Christmas Carole: A One-Woman Show”. Off-Broadway & Regional Credits include the Culture Project, Paper Mill Playhouse, NYMF, Ensemble Theatre of Cincinnati, MTC and more. Proud Motion Capture Performer for Rockstar Video games, featured in RED DEAD REDEMPTION 2 & GRAND THEFT AUTO V: ARENA WARS. She started her Production Company, AKA Studio Productions, in 2011 and their work has been selected for over 150+ film festivals. TV Properties include: MULLIGAN (2018 LA Film Festival, 1st Place Flickers RIIFF) , RULES OF COOL (FULLSCREEN), CAPITAL ADVICE (ITV Fest) & Films include: ACE (Toronto Inside Out Fest), photo op (Winner SENE Film),  and the upcoming film’s BLINDSIGHT (LA Shorts) & ABSENT MIND (Toronto International Shorts). She inspired and Co-Produced the feature film BEAUTY MARK which was an official selection of the LA Film Festival in 2017 and was distributed by the Orchard. Her feature film BOY HERO is slated to film in Fall of 2020 in Co-Production with Pigasus Pictures.

Linda Leonard has been a professional director, choreographer, teacher, actor (AEA,SAG/AFTRA), singer, and dancer for over 45 years, here in the Metroplex and in NYC, Chicago, Los Angeles, and abroad. Linda was in the Broadway national tour of Cats. Linda has directed or choreographed for WaterTower Theatre, Stage West, Circle Theatre, Echo Theatre, CitiRep, and Theatre Three to name a few in Dallas and Fort Worth. Linda was the Education Director for WaterTower Theatre (3 years), is a professor at KD Conservatory, and her credits include award-winning roles such as Ann Richards (Critics Forum and Column Awards) and Aurora in The Kiss of The Spiderwoman (Leon Rabin, Column and Critics Forum Awards). Linda also has numerous credits in film and television, and is represented by The Horne Agency in Dallas/LA, and directed a web series about autism, “Saving Hope”, which premiered in March of 2019. Linda is dedicated to the process of creativity, nurturing, and empowering young artists in every aspect of the arts.

Avra Aron is a writer, actress, and teacher. A graduate from the Stella Adler Conservatory at NYU’s Tisch School of the Arts, she spent the last eight years working abroad in London where she directed various plays and musicals, including one which was shown at the Royal Academy of Dramatic Arts. She also directed students in preparation for London Academy of Music and Dramatic Arts examinations. Her writing has been published in literary journals, including one which was listed as a Notable Special Issue of 2018 by ‘The Best American Essays 2019.’ She was a finalist for the VanderMey Nonfiction Prize.

JPAS online classes and workshops are going to be amazing. Children will learn from and work with some of the finest industry professionals. Kids and teens, get ready to be in touch with your inner artist, build your confidence, learn skills, and have fun along the way.

If you have questions, please contact J Performing Arts Space Director, Alise Robinson, at arobinson@jccdallas.org or 214-239-7140.

The JPAS Experience at Levine Academy

JPAS is offering some fabulous performing arts enrichment classes taught by our JPAS staff hosted at Levine Academy – classes are open to everyone. You DO NOT need to be a Levine student to attend.

Playwrights Perform
Unleash your creative power by writing and performing your own show! Students get the amazing opportunity to form an acting company and write a play through brainstorming, improvisation, and work-shopping scenes. Students rehearse together before proudly sharing their creation with the world on the last day of class, complete with costumes, music, and much dramatic flair!

Improv-sational
An introduction for anyone who wants to learn the power and fundamentals of improvisation…the basic tools, rules and philosophy through games, drills, and simple scenes. Experience the power of play, and the excitement of improvisational fun in a safe environment. A strong foundation in improvisation sharpens acting abilities and promotes creativity and personal growth.

Our JPAS JR series is geared toward children 3 – 6 years and is designed to get their feet moving and their imaginations flowing all while teaching skills and building confidence. Learn the basics in a fun, safe, and nurturing setting intended to unleash the little theater bug in the youngest of children.

If your child is interested in visual arts, we have inspiring, engaging small group art classes children 5 and up as well. Click here to learn more.

Go on a musical adventure every week with Avra and her ukulele. Each class takes the form of a musical story, during which preschoolers sing, move to music, read musical notation, learn Italian musical terms, develop appreciation for classical music, and grow awareness of pitch, tempo, and dynamics – all while having so much fun, they don’t realize they are learning. The last week of class is a showcase in which family and friends are invited so children can demonstrate all they have done and get a chance to shine.

Using theater games and improv as our creative play, our actors will learn the art of drama while improving their imagination, creativity, and social skills.

If your dancer is into musicals, performances, or just wants to get up and move this class is for them! Join us as we get our bodies moving and learn choreography, some basic techniques and play games to our favorite Broadway tunes in a fun and supportive environment.

Art Experiences is an innovative, choice-based art program that offers students the opportunity to respond to their own ideas and interests through art-making. Working at their own pace, students learn problem-solving, independent thinking, cooperative learning, and persistence through creative discovery. Veteran art teacher Susan Stein guides the community of student artists, determines their needs, creates structure, and introduces a large variety of new mediums and techniques.