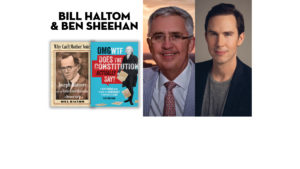 Online registration ends at 6:00 pm CT on October 20. If you need to register after 6:00 pm CT contact Rachelle Weiss Crane at rweisscrane@jccdallas.org

Ben Sheehan, OMG WTF Does the Constitution Actually Say?: A Non-Boring Guide to How Our Democracy is Supposed to Work

Tickets: $11 for one virtual ticket

On August 18, 1920, thirty-year-old State Representative Joseph Hanover of Memphis walked through the grand lobby of The Hermitage Hotel to be greeted by deafening cheers and jeers from women wearing yellow or red roses. Yellow roses symbolized their support for the proposed Nineteenth Amendment to the United States Constitution granting women the right to vote; red roses opposed it. Joe Hanover had become the nation’s leading male voice in the fight for woman suffrage. The most powerful forces in Tennessee politics opposed him. But Joe Hanover was not going to back away from the fight. Joe Hanover and his family had immigrated from Poland 25 years earlier to escape the Czar of Russia’s tyranny. Joe asked: “Why can’t Mother vote?”

Pro-suffrage leader Carrie Chapman Catt summoned the freshman legislator to her suite in The Hermitage Hotel in Nashville on Aug. 8, 1920, to ask Joe Hanover to become the floor leader in the Tennessee House of Representatives. Hanover, a Jewish immigrant who won his election as an Independent, spoke passionately about his family’s flight from oppression in Poland. He said he was a true conservative who believed deeply in the Bill of Rights and that the rights set forth therein should be afforded to all Americans. For this, he was threatened in phone calls and physically assaulted in a hotel elevator. Governor A.H. Roberts assigned Hanover a bodyguard. But Hanover was determined. He held together the pro-suffrage faction votes for woman suffrage when Tennessee became the Perfect 36, the last state that could possibly ratify the Nineteenth Amendment. Hanover, Banks Turner of Yorkville and Harry Burn of Niota were the votes in the end that made the difference.

“Why Can’t Mother Vote: Joseph Hanover and the Unfinished Business of Democracy” is a stirring account of the people who led the fight in Tennessee’s pivotal vote to ratify the Nineteenth Amendment granting women the right to vote.

OMG WTF Does the Constitution Actually Say?: A Non-Boring Guide to How Our Democracy is Supposed to Work

Do you know what the Constitution ACTUALLY says? This witty and highly relevant annotation of our founding document is the go-to guide to how our government really works (or is supposed to work). Written by political savant and entertainment veteran, Ben Sheehan, and vetted for accuracy by experts in the field of constitutional law, OMG WTF Does the Constitution Actually Say? is an entertaining and accessible guide that explains what the Constitution actually lays out.

With clear notes and graphics on everything from presidential powers to Supreme Court nominations to hidden loopholes, Sheehan walks us through the entire Constitution from its preamble to its final amendment (with a bonus section on the Declaration of Independence). Besides putting the Constitution in modern-day English so that it can be understood, OMG WTF Does the Constitution Actually Say? gives readers all of the info they need to be effective voters and citizens in the November elections and beyond.

Presented in partnership with

Ben Sheehan is a former award-winning executive producer at Funny Or Die. He founded OMG WTF (Ohio, Michigan, Georgia, Wisconsin, Texas, Florida) to teach voters about state executive races during the 2018 midterms. The Hollywood Reporter listed him as one of entertainment’s 35 Rising Executives Under 35 and OMG WTF’s Gerrymander Jewelry was a finalist for Fast Company’s World Changing Ideas 2019. In 2016, he helped register 50,000 voters through digital videos as the executive director of Save the Day. The projects he’s been involved with have received over a billion views.

Bill Haltom is a father, husband, lawyer and award-winning writer. He is the author of six books and has been a newspaper and magazine humor columnist for over 25 years. He has served as chair of the editorial boards for four magazines, including the ABA Journal, the flagship publication of the American Bar Association. A popular speaker, Bill has delivered commencement addresses and has been the featured speaker at conventions, banquets and leadership seminars. Bill lives in Memphis with his wife (Judge Claudia), his daughter (Princess Margaret) and his two beagles (Atticus and Scout).

Marc Stern is a leading expert in legal advocacy on issues of concern to the Jewish community, including the new field of “lawfare”—pursuing war through the use of international legal procedures. He came to AJC after 33 years at the American Jewish Congress, where he was General Counsel since 1999 and acting Co-Executive Director since 2008. Stern has authored numerous legal briefs, published many scholarly articles, and has argued four cases before the U.S. Supreme Court. He earned a B.A. at Yeshiva University and a J.D. at the Columbia University School of Law.