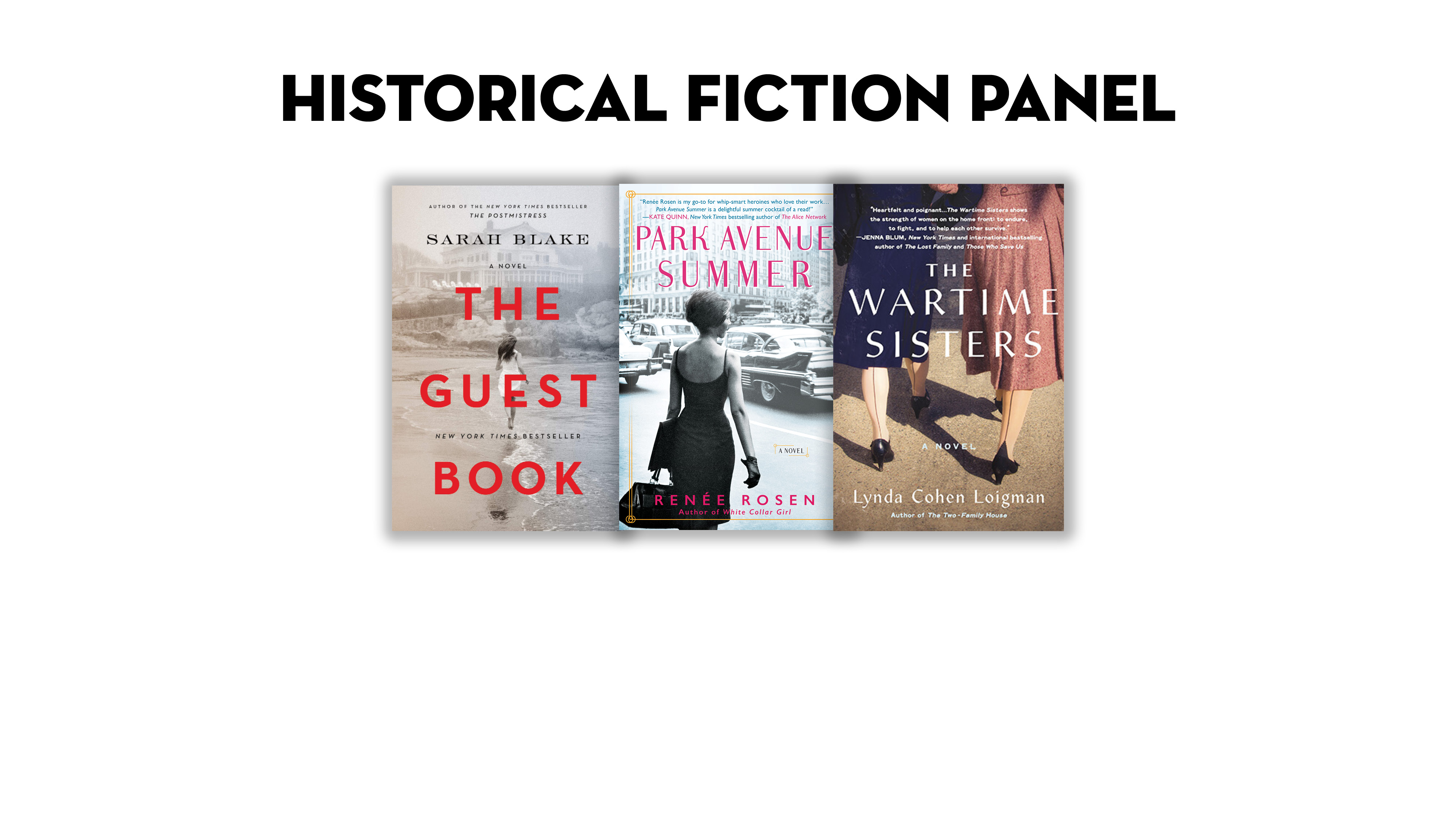 Sarah Blake, Lynda Loigman, and Renée Rosen in conversation with Andrea Peskind Katz addressing the roles of Jewish women during and just after WWII.

“The Guest Book is monumental in a way that few novels dare attempt.”
– The Washington Post

A lifetime of secrets. A history untold.

No. It is a simple word, uttered on a summer porch in 1936. And it will haunt Kitty Milton for the rest of her life. Kitty and her husband, Ogden, are both from families considered the backbone of the country. But this refusal will come to be Kitty’s defining moment, and its consequences will ripple through the Milton family for generations. For while they summer on their island in Maine, anchored as they are to the way things have always been, the winds of change are beginning to stir.

In 1959 New York City, two strangers enter the Miltons’ circle. One captures the attention of Kitty’s daughter, while the other makes each of them question what the family stands for. This new generation insists the times are changing. And in one night, everything does.

So much so that in the present day, the third generation of Miltons doesn’t have enough money to keep the island in Maine. Evie Milton’s mother has just died, and as Evie digs into her mother’s and grandparents’ history, what she finds is a story as unsettling as it is inescapable, the story that threatens the foundation of the Milton family myth.

Moving through three generations and back and forth in time, The Guest Book asks how we remember and what we choose to forget. It shows the untold secrets we inherit and pass on, unknowingly echoing our parents and grandparents. Sarah Blake’s triumphant novel tells the story of a family and a country that buries its past in quiet, until the present calls forth a reckoning.

It’s 1965 and Helen Gurley Brown has just taken on the impossible: reviving the venerable but fast-fading Cosmopolitan magazine. With the old guard at the magazine fighting her from the inside, Brown relies on her new assistant, Alice Weiss, to act as her eyes and ears, teaching the young woman along the way that intelligence, savvy, and an ironclad will can move mountains. Told from Alice’s perspective, Park Avenue Summer offers a window into HGB’s tumultuous efforts to reshape Cosmo into a magazine for “her girls.” Informed by author Renée Rosen’s extensive research—including interviews with Lois Cahall who considered HGB her second mother—the novel contains some irresistible details that only those closest to HGB would know: the way she ate salad with her fingers, one lettuce leaf at a time or the small chair she sat in during business meetings so she wouldn’t intimidate anyone.

Renée Rosen is the bestselling author of Windy City Blues, White Collar Girl, What the Lady Wants, and Dollface. She is also the author of Every Crooked Pot, a YA novel published in 2007. Her newest novel, Park Avenue Summer, about Cosmopolitan’s iconic Editor-in-Chief, Helen Gurley Brown, will be published April 30, 2019 by Penguin Random House/Berkley. Renée lives in Chicago where she is at work on a new novel, The Social Graces, coming in 2020.

Two estranged sisters, raised in Brooklyn and each burdened with her own shocking secret, are reunited at the Springfield Armory in the early days of WWII. While one sister lives in relative ease on the bucolic Armory campus as an officer’s wife, the other arrives as a war widow and takes a position in the Armory factories as a “soldier of production.” Resentment festers between the two, and secrets are shattered when a mysterious figure from the past reemerges in their lives.

Lynda Cohen Loigman grew up in Longmeadow, Massachusetts. She received a B.A. in English and American Literature from Harvard College and a law degree from Columbia Law School. Lynda practiced trusts and estates law in New York City for eight years before moving out of the city to raise her two children with her husband. She wrote The Two-Family House while she was a student of the Writing Institute at Sarah Lawrence College. The Two-Family House was chosen by Goodreads as a best book of the month for March, 2016, and was a nominee for the Goodreads 2016 Choice Awards in Historical Fiction. Lynda’s second novel, The Wartime Sisters, was published on January 22, 2019.